I recently added two new garden beds to my yard, filling them with local horse manure. Needless to say I now have a few new weed species! This is one of them: 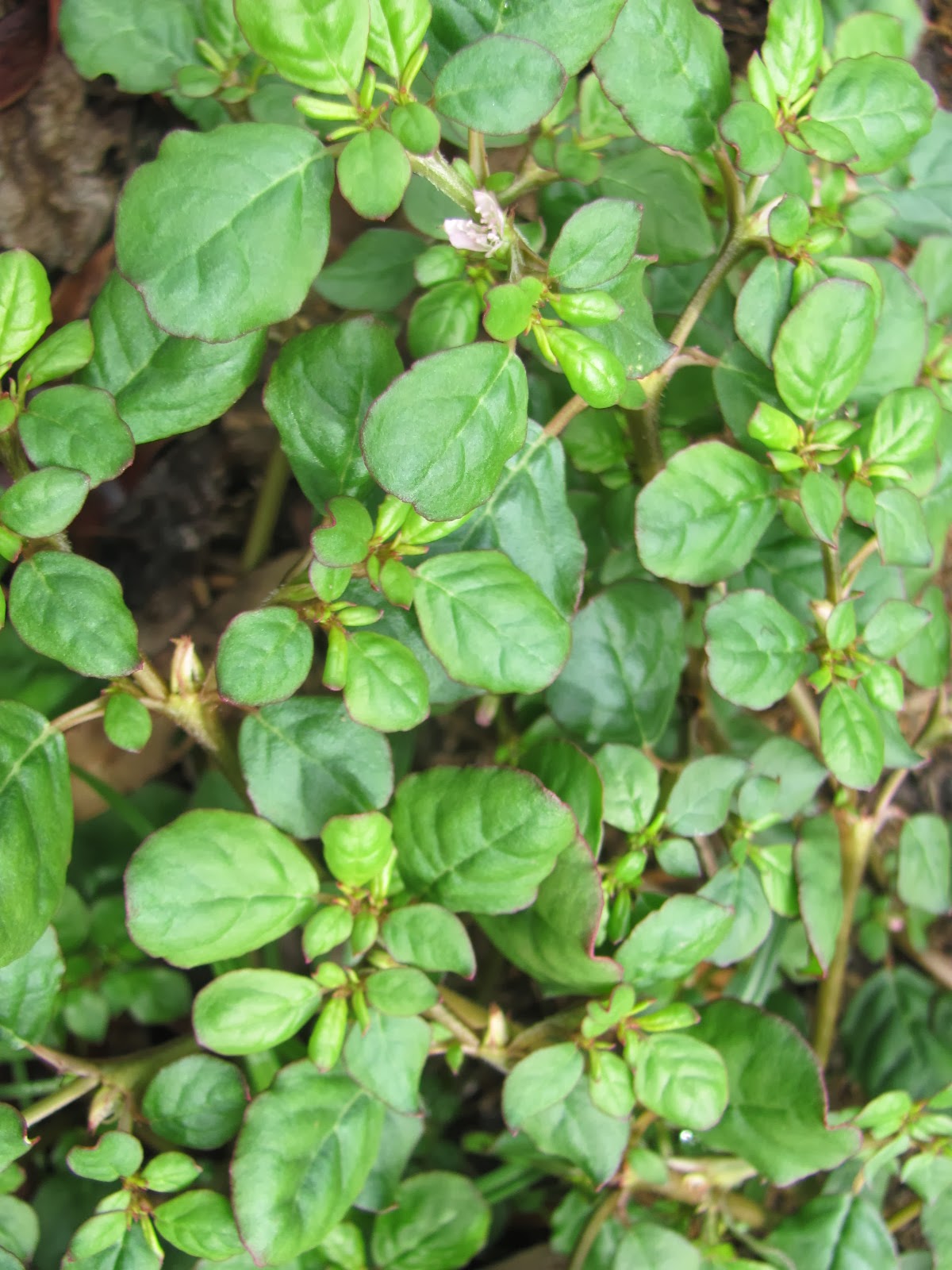 Trianthema is a pigweed from the AIZOACEAE family, and originates in Africa and South America, It is quite variable in appearance due to environmental factors.

When I discovered it I was about to remove it from the garden, and as with all new plants I smelt and tasted a bit of the leaf, and this one was not only palatable, but quite tasty! I asked around and all agreed it was a 'pigweed'. Now, to me pigweeds belong in PORTULACAEAE family, so I could not find it at first, but coincidentally it's picture appeared near the PORTULACAEAE section in Stanley & Ross's Volume 1!

It is known for its edibility in Africa, and so I now have a new salad herb!

Additionally, this herb has medicinal uses. It is known as Bishkhapra in Ayurvedic medicine, and there are both a red-flowered, red-stemmed variant, and a white-flowered green-stemmed variant. It has been used for a wide variety of complaints ranging from edema to cancer to intestinal parasites. There is an in-depth article on it's medicinal properties here; http://www.ncbi.nlm.nih.gov/pmc/articles/PMC3459455/

Posted by BarefootDreamer at 7:30 PM 6 comments:

This inconspicuous little succulent is a halophyte that can be found in any state of Australia, and has edible leaves and berries. The berries are small (~5mm) and though usually red can be yellow, although I believe that the yellow fruit are immature stages of the red fruit, as they occur on the same plant. The plant is quite variable, from prostrate to upright, with grey to green leaves. There are two varieties in South-east QLD, E. tomentosa var. tomentosa and E. tomentosa var. glabra, having either tomentose or glabrous stems and leaves respectively.


﻿
The leaves have been eaten by early white people in Australia to prevent and/or cure scurvy. There is no other medical information available on this plant. There are records of the fruit being eaten by the Alyawara people of central Australia. 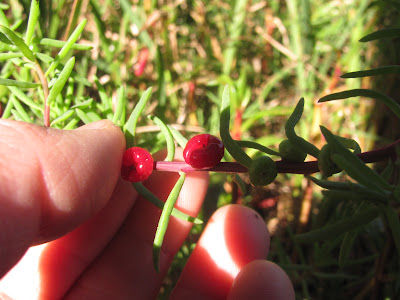 
Posted by BarefootDreamer at 1:12 AM 7 comments:

The banana. What an amazing plant. It’s up there with coconuts and bamboo as being one of the plants with the most varied uses in the world. It provides nutritious food, natural packaging, plates, umberellas, medicine,mulch and so much more. What more could you ask from a plant? 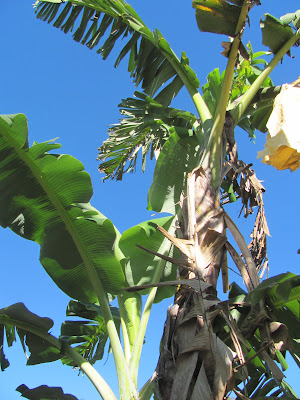 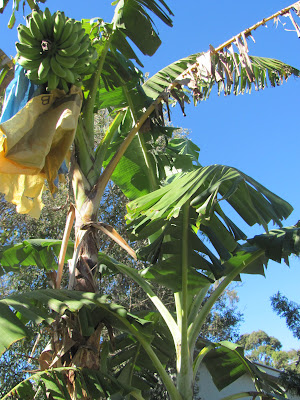 The banana plant has been in cultivation for many years, and the cultivated variety is sterile, producing no seed. The wild bananas that still grow in tropical-subtropical countries produce numerous seed.
Fruit is edible cooked in its green immature stage, or either raw or cooked in its yellow mature stage. The colour of the skin varies with the type of banana, with ‘Blue Java/Ash Plantain’ having a distinct blue tinge to the immature fruit (although ripe fruit is still yellow), and ‘Red Dacca’ having a permanent deep red/maroon skin (although the inside flesh is deep yellow to orange).

One of my favourite bananas for flavour and texture is what I think is called ‘Saba’, although I am not sure. It can be eaten raw when ripe, or cooked when green. Simply peel the green bananas, boil, mash, mix with grated ginger, garlic and eschallot/onion, form into cakes and pan fry. Delicious. Cooked green banana tastes somewhat like cooked potato.

Musa has medicinal qualities also, with the whole plant being used in some way. The root has been as anthelmintic (to kill intestinal worms) and for reducing bronchocele. The fruit is eaten to prevent and cure stomach ulcers, in combination with pineapple, blueberries, cloves, ginger and cinnamon. The peel and pulp of ripe banana have both antifungal and antibiotic activity, and the unripe banana fruit has antimicrobial/antibiotic activity  (Fagbemi et al, 2009).
A stem maceration is given orally for the treatment of diabetes in Cuba, also a decoction of the root is given orally for the treatment of unspecified venereal diseases. The same paper reports an unusual method of treating earache, that of frying the leaves and applying topically (Cano & Volpato, 2004).
Musa paradisiacal has been used to treat alopecia (female), headache, burns, bites (snake, dog, spider), cancer (nose), diarrhoea, dysentry, epilepsy, fever, fractures, gangrene, migraines, nausea, smallpox and numerous other diseases. Finding details of how the remedies were prepared for each specific ailment is extremely time consuming, as it involves trawling through vast numbers of journal articles, but as I find records of use, I will add them here. If you have a particular query, just leave a comment and I will see what I can find.

Posted by BarefootDreamer at 9:55 PM 5 comments:


A. conyzoides has long been used medicinally around the globe, in addition to possessing insecticidal and nematodicidal activity.


Whilst A. conyzoides has traditionally been eaten as a vegetable, contemporary researchers have discovered in it potential hepatotoxic compounds, which is why I cannot recommend its use as a vegetable today. However, being young, strong and healthy with no liver complaints, I would eat it myself if I were hungry and lacking other food sources. Other studies have found the essential elements K, Na, Ca, Fe, Mg, Mn and Zn and the non-essential elements Al, Ba, Sr and Rb to be present in significant concentrations. Other elements present at trace levels include Co, Cr, Sc and V. The researchers conducting these studies appear to believe that the presence of the elements calcium, potassium and sodium may be responsible for disease prevention in traditional usage, and that Iron Manganese and Zinc presence which are present in hormone, insulin, protein and immune reactions may also contribute to its healing properties in traditional medicine which include the treatment of diabetes, diarrhoea and infertility. These same researchers, however, warn against indiscriminate use (ingestion) of A. conyzoides due to the presence of Barium, which has the potential to accumulate in the body through repeated use and is a known toxin (Dim et al, 2004).

In studies conducted by Borthakur and Baruah (1987) the essential oil of  A. conyzoides has been shown to contain compounds that act as antijuvenile hormones in insects, effectively rendering them sterile, which would explain its use as an insecticide.


Blue Billy Goat Weed has been used to treat  wounds, bites, burns, typhoid fever, ‘body swelling’, tumours and as a ‘hair lotion’. Unfortunately, although several papers have listed which ailments Ageratum has been used to treat, they rarely go into any detail as to which part of the plant was used or how it was prepared. In Africa it has been used to treat pneumonia, although specifics on how to use the plant are not given. Its most common use appears to have been as a fresh leaf poultice for wounds, cuts bites or skin complaints, and this is most likely due to its antibacterial properties. This plant has also shown anti-inflammatory activity and increased wound healing in clinical trials on rats. In South America, A. Conyzoides twigs have been used as a vegetable. Following is a list of its medicinal uses;
Wounds, Bites, Burns –  the leaves are made into a paste and applied directly.
Colic, Colds, Fevers, Diarrhoea, Rheumatism, muscle spasms and as a tonic – aqueous extract (which I assume means a decoction or infusion), although wether for internal or external use is not specified.
Headache – poultice of boiled leaf paste
Bacteriocide, Antidysentric, Fever, Colic – no details given
Overall I would suggest only using this plant externally.

Posted by BarefootDreamer at 7:08 PM 4 comments:

This weekend the Lifeline Bookfest is being held in the city, and being a book lover I had to have a look. I wasn’t expecting to find much that piqued my interest, but I was pleasantly surprised! 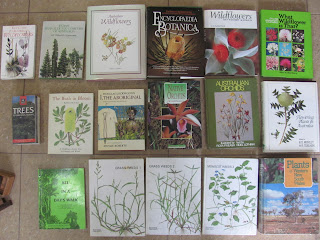 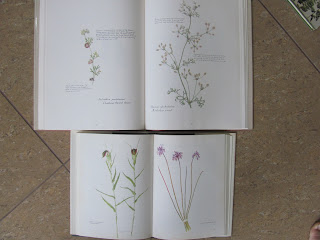 One rare find was a book by Kathleen MacArthur, a fellow wallum enthusiast. The late Kathleen hailed from the Sunshine Coast, where once upon a time wildflowers ruled the land. Unfortunately now, the land appears to be ruled by developers.﻿


Kathleen has presented a beautiful book in the form of a diary, filled with her paintings of and dedicated to wildflowers, with a history of each flower. I now have two of her books in my collection.

Another book that I am looking forward to reading is I, the Aboriginal. While not actually written by an Indigenous Australian, it tells of the accounts of a white man’s 30 year relationship with local people, in particular a man named Waipuldanya. Hopefully I will learn more about the plants I love, and how they were a part of people’s lives.

I obtained a set of three volumes that I have never heard of before, weed identification books, including grasses, which I have found decent books on hard to come by. These books have wonderful illustrations making identification quite simple!
Posted by BarefootDreamer at 6:16 PM 1 comment:

This Australian native medicinal plant is found on rainforest edges and is used as a painkiller. 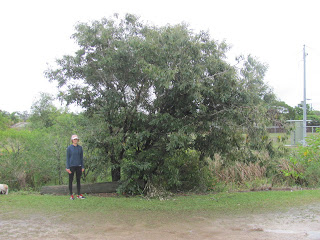 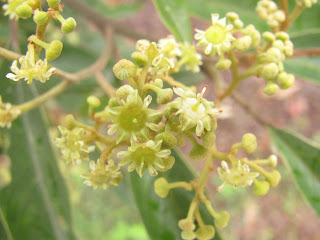 I first noticed Alphitonia excelsa when driving up the coast. It stands out from the other trees that line the road, being white against the dark green backdrop, and its habit is noticeably spreading, forming horizontal stripes of pale contrast. 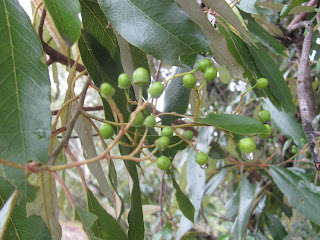 I haven’t come across any records of Alphitonia being used as a food source, and even accounts of it being used internally are rare, and limited to chewing of the young leaf tips for stomach aches, although no mention was made of whether they were swallowed or not. The majority of Indigenous Australian remedies are used externally, and one reason given for this is that the Indigenous peoples lacked containers in which to boil water, so relied on overnight soaking of plants in water instead, and that this method was less reliable in terms of dosage (I’m really not sure what the reason was). I have tasted an infusion of Alphitonia, and it has a distinctive flavour, very hard to describe, I guess burnt cloves and soap would be closest.

﻿﻿﻿﻿﻿﻿﻿﻿﻿﻿﻿﻿
Known as soap-bush, due to the lather the leaves produce, this plant is difficult to get a lather from. I made a very strong infusion, and only achieve a lather after vigorously shaking it.


Known as soap-bush, due to the lather the leaves produce, this plant is difficult to get a lather from. I made a very strong infusion, and only achieve a lather after shaking it.  I have used it as an antibacterial hand wash, and an antibacterial wash for my dog’s ears. To make this, simply pour freshly boiled water over the crushed leaves, and let sit for a few hours, for external use. I wet a cloth in the warm solution and wash daily inside her ears, drying afterwards, and her ears are now odour free.
The bark of Alphitonia is not normally so dark as in the photo with some bark removed, which was taken immediately after a rain. It actually gives quite a light appearance, in part due to the lichens covering it.
﻿﻿ 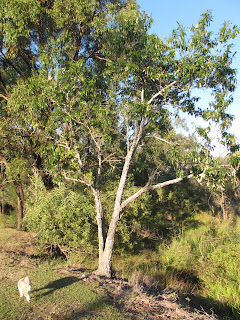 Its main use seems to be based around anti-inflammatory and analgesic properties, and its uses include; leaves have been used to sooth sore eyes; as a bark and wood decoction gargle for tooth-ache; and as an infusion of bark, root and wood as a liniment for body pains. The timber has been used as a dye for cloth (red-brown to orange-yellow).
I used the strong infusion as a liniment, but its effects were rather transitory. When I have the opportunity to collect enough of the bark, I will try making a stronger infusion and see how that works.